Cow vs. Romie. Cow won, but Romie is OK.

This past weekend at my parent's house, my little 10 pound, fearless Romes decided to hop the fence and join the neighboring herd of cows. 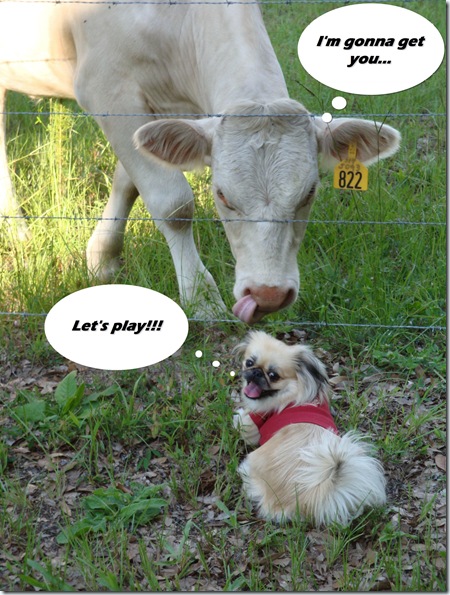 She's tried this once before, but I was able to call her back before she got too far in. Well, not this time. There were a bunch of people at my parents house and we were all standing around visiting. I looked over and little Romie was standing among 10 cows and started to taunt one of them (like she does with Seven when she wants to play). The cow then nudged her with his big head, and Romie rolled. Right as the cow was about to pick up his big hoof to kick her, Romie got on her feet, and made her way back through the barbwire fence!

She ran back to us crying and I thought that she had been seriously hurt and was still in shock. I was SO freaked out! She was whimpering and crying while Josh held her to give her an exam. After looking her over very carefully, she seemed OK, just really shaken up.

It wasn’t until 4 days later, that I noticed that Romie would whimper a little when I picked her up. It really concerned me, so we jetted off to the vet to get her checked out. I was so relieved to learn that Romie was fine after all. The vet thinks that she is probably just bruised and a little sore. 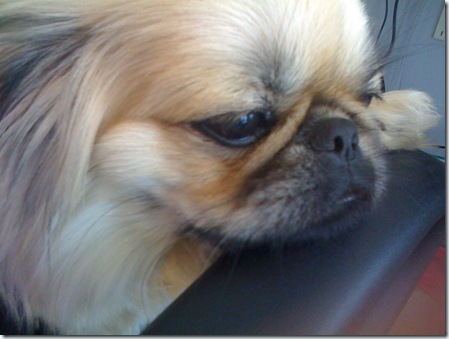 Now, Romie is taking some anti-inflammatory meds, and will be laying low for the next week. We are SO lucky that she is ok! I don’t even want to think about what would have happened if that darn cow had actually kicked her! From now on, I will be keeping a closer eye on Seven and Romie while we are around those cows!

On a side note ~ I used Windows Live Writer for the first time instead of Blogger to write this post. Do you use this or Blogger? Which one do you prefer?

Email ThisBlogThis!Share to TwitterShare to FacebookShare to Pinterest
Labels: Seven and Romie

Over the past three years my life has been flipped upside down. I am 31 years old and have 4 beautiful angel babies, who are fondly known as my “Green Beans”. The first of my quads, Heidi, held on as long as she could and was born on January 31, 2009 after pPROMing at 17 weeks. A few weeks later, I pPROM’d with my sweet Lily. Lily, Paige, and Rylan were all born at 22 weeks on February 23, 2009. Just after being released from the hospital empty handed, I returned with a high fever and infection. Two of the nights I spent in the hospital that week, I honestly thought I was going to die. It was the sickest and most hopeless I’ve ever been. I’m pretty sure my diagnosis was a broken heart.

My journey to parenthood has definitely had its share of happiness and heartbreaks. I got through every day by staying close to friends and family, blogging, and trusting in God that my future will be bright. All the love and support I’ve gotten has greatly helped me manage……I am alive and well, and want to be my absolute best as a result of this.

On May 1st 2011, we welcomed our sweet baby girl, Taylor, into this world. She is my miracle baby and brings so much joy and happiness to my life. She is my reminder every day that God is good and faithful.

I have come out of all of this with a better appreciation of life. I hope to make the best of this situation by helping others who will experience a similar loss.